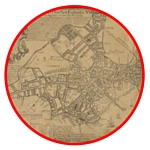 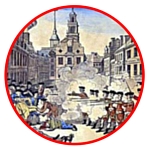 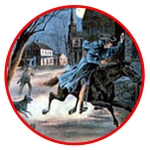 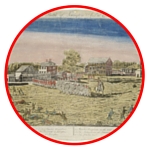 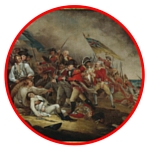 This site contains a  selection of  Primary Source maps, images and documents which will offer help in insight into details of the events that occurred in and around Boston at the beginning of the American Revolution. Some maps and documents from this time were often created as propaganda to promote one point of view or another, others to provide basic information about a place or event.  Carefully examine the map, or document and decide if it confirms or contradicts what you may already know? See if you can answer your own questions, or even come up with new questions of your own!

​Maps, images and documents from the time of the American Revolution show a very different picture of the geography, topography, and ﻿shoreline surrounding Boston than we see today. The many hills, harbors, and a narrow neck attaching the peninsula to the rest of the mainland are well documented in the maps made leading up to, during and immediately after the revolution. The events that occurred from 1768, when the British troops first set foot in Boston, to their evacuation nine years later, would be greatly influenced by those hills, harbors and the tiny stretch of land that connected Boston to the rest of New England and the other 13 Colonies!
Today, the shoreline of Boston, represented below by the map from 1995 looks very different than the shoreline of Boston in 1775. Before fighting began during the American Revolution, close to 16,000 people lived, worked and played on the small land mass that was called Boston on the maps below!
(Green = Land,  Marsh/Water= light green,  Water = Blue) 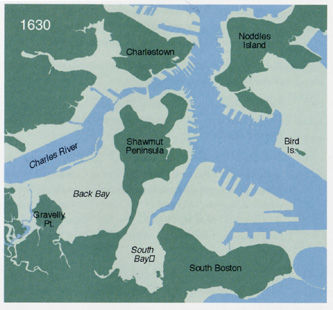 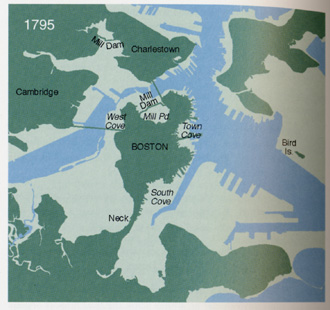 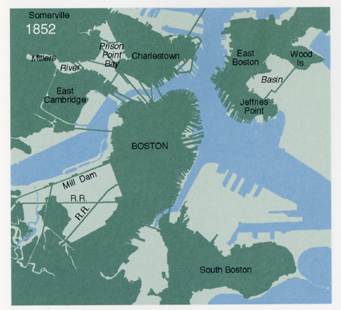 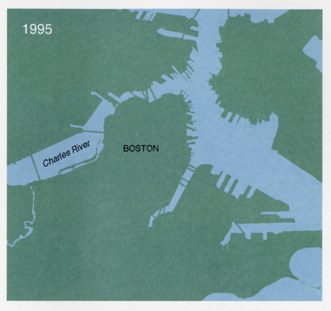 Krieger, Alex, David A. Cobb, Amy Turner, and David C. Bosse. Mapping Boston. Cambridge, MA: MIT, 1999. Print.
John Bonner's 1723 map of Boston, was the first Map published of Boston. After Bonner died, the map was updated and reprinted several times by his partner, William Price, who's version is on the right. Printed by Price in 1769, just one year after British troops arrived in Boston, the map provides  a very useful record of what Boston looked like before the start of the revolution. Both versions highlight the fact that Boston was confined to a small peninsula with a narrow "neck" of land sticking out from one end that connected it to the rest of New England. The map depicts the narrow streets, and houses of Boston, demonstrating how close and confined life for the close to 16,000 people living in Boston before the start of the revolution must have been. Furthermore, details of the wharves, ships, and businesses indicate that Boston as a busy seaport and full of activity,  and a vital commercial asset to the British empire. 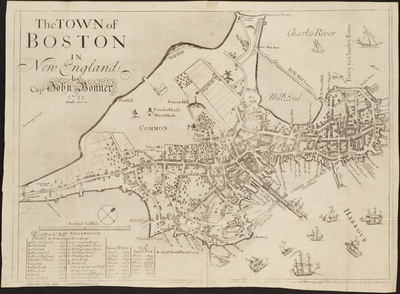 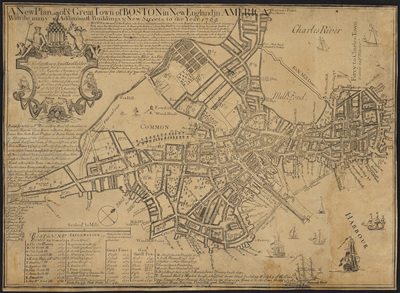 Boston 1769
Author: John Bonner and William Price
Date: 1769
Title: A new plan of ye greast town of Boston in New England in America, with the many additional buildings & new Streets, to the year 1769
URL: ﻿https://collections.leventhalmap.org/search/commonwealth:9s161f21f
​﻿

Look at how close the landmarks, such as the Old State House,  and Long Wharf are! Did you realize that Paul Revere's house was only 6 blocks from where the British landed in Boston in 1768? The map below has been placed on top of a current day map of Boston. Notice that there were no bridges in Bonner's map, only the long neck that connected to the land to the south. The numbered circles indicate many of the historic sites from the time of the American Revolution, many which still exist today. Notice how close together most these sites were. See if you recognize any other familiar sites on the map from 1768 or the map from today? For non-iPad users, an interactive version of this map, overlaid on a current map, is available at a http://d2o8owo4k087al.cloudfront.net/index.html .  Select"Prelude to Rebellion"  and then "A New Plan of ye Great Town of Boston in New England and America, with... (1769)". Use the "Past - Present " Slider at the top right of the page to compare.